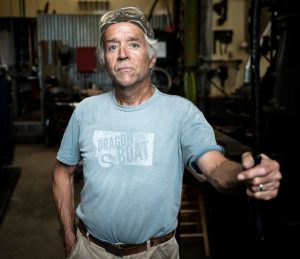 Jeffrey Funk, director of the New Agrarian School, has been Blacksmithing in Bigfork, Montana for the past four decades. With work ranging from plowshares to public sculpture, his recent emphasis has been a wide variety of architectural metalwork and tools of all types. A regular demonstrator at conferences around the country, as well as instructor at numerous craft schools for many years, Jeffrey is directing his primary attention to sharing this extraordinary craft of blacksmithing. Expect a broad foundation in traditional forging technique, along with innovative tooling and problem solving from Jeffrey’s classes.

Northern California based artist Monica Coyne forges steel into surprising forms, using the strength of the material to produce sculptural and architectural works that look and feel light and soft. Her work with iron joinery is influenced by traditional woodworking techniques, but exploits the unique qualities of iron to create movement in the transitions and connections. Experimenting with balance and asymmetry she has developed techniques in forging figurative sculpture that seem to defy gravity. Monica’s commission work can be seen in numerous galleries, public spaces, and private settings. Her work has been shown nationally and internationally, including a solo show at The Metal Museum in Memphis, Tennessee, and publications including Elementum Journal (UK), Fine Homebuilding (USA), HEPHAISTOS (Germany), the Anvil’s Ring (USA), and NOMMA (USA). She has demonstrated and taught workshops widely in America, and was awarded the Victor Thomas Jacoby Award for excellence in art in 2018.

You can see Joy’s work at www.monicacoyneartistblacksmith.com 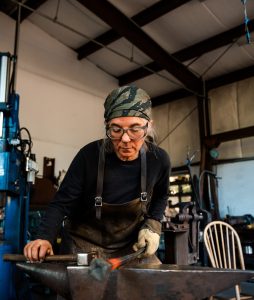 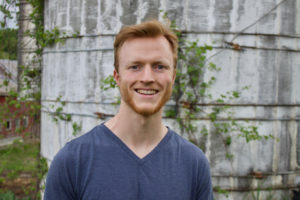 Jordan LaMothe began pursuing his interest in blacksmithing at age 14, taking a class, reading books, and setting up his own forge in his parents' barn. His interest in making hand tools led him to make his first knife two years later, and knives quickly became his primary focus. After receiving his B.A. in music from Williams College, Jordan began bladesmithing full-time. He makes a wide variety of knives and swords, from "user" knives for the kitchen and field to presentation blades, and teaches regularly at several craft schools. Jordan earned the Journeyman Smith ranking in the American Bladesmith Society in 2018, and was a champion on History Channel's bladesmithing competition Forged in Fire, season 4, episode 7.

Tony Stewart has practiced blacksmithing for over thirty years, first in Kent, England, then Kenya (east Africa), and for the past two decades in Northwest Montana. Tony’s Iron Thistle Forge produces a wide variety of architectural metalwork using a broad pallet of traditional blacksmithing techniques. He brings to his teaching a great deal of practical experience, humor, and a healthy dose of whimsy. Unfortunately not well known beyond this region, students should expect an instructor with a rare depth of insight into his medium, and an unusually authentic craft experience. 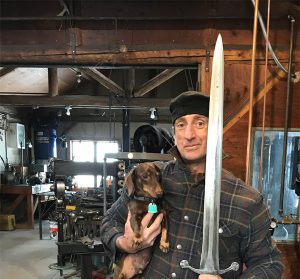 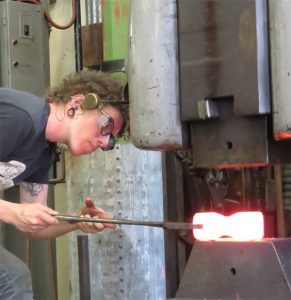 In my work, concept and craft are coequals. The very physical and technically demanding process of forging and forming shapes in glowing steel is my passion. Using these processes, I address broader issues of “body” and “landscape” through the lens of social and environmental justice. I express these ideas by making sculpture, furniture, and architectural elements. The forms I create are physical representations of restrictive and oppressive social systems and the battle against them. In my work, symbolic references to systemic expectations and oppressive uses of the human body and landscape dominate the linear and framing elements while the queer, powerful, and subversive parts of life, body, and politics are referenced by the masses that push out of that framework.

Joy Fire has been exploring blacksmithing and other aspects of metalworking since 2010 when she received her BA from Westmont College. She currently practices her passion for forged metals in a studio she shares with her partner and another smith in Santa Ana, California. Joy’s interest in the sculptural possibilities of metals led her to pursue an MFA at Claremont Graduate University which she will complete in early 2022. She has taught welding, blacksmithing, and bronze casting at Orange Coast College since 2017. Joy considers teaching to be an integral part of being an artist, and also as an essential way to contribute positively to other people’s lives.

“I try to be aware of the many privileges I have in order to use them for the greatest benefit to the most people. One of the ways I try to do this is through my work with the organization Society of Inclusive Blacksmiths. Our mission is to facilitate a positive blacksmithing community where all are equally valued and to promote visibility and provide opportunities for those who have historically been marginalized in blacksmithing.”

You can see Joy’s work at joyfireblacksmith.com 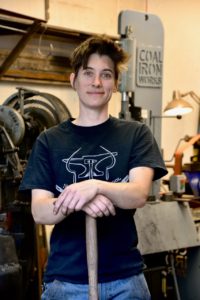 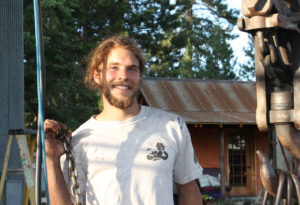 Peter Haarklou has been blacksmithing since early 2015, at first working with the well-known smith Scott Lankton and in conjunction with the Webster Township Historical Society in Ann Arbor Michigan. He has been living and working in Montana since 2018 where he was instrumental in helping to establish the New Agrarian School and has continued to deepen his experience in the craft. Serving as assistant in classes led by the school’s director, Jeffrey Funk, Peter has proven both his passion and patience in guiding students to succeed in blacksmithing.”

James is the founder of Alchemy Metalworks and lives in Oakland, California. James was born in 1957 and grew up in Washington State and California. After receiving an M.S. in Chemistry from the University of California at Berkeley he moved to Germany to pursue his true ambition as a craftsman.

In the scenic village of Diessen in Upper Bavaria, James served a traditional three-year apprenticeship under a master blacksmith. This study in artistic metalworking rested on the centuries-old skills of hand forging and many other decorative techniques. James’ experience ranged from the restoration of antique decorative ironwork to contemporary metal design. Upon completion of his apprenticeship in 1985 he graduated as a distinguished journeyman in the guild of blacksmiths. James then continued his study of artistic metalsmithing in Europe for three more years, working in Germany, northern Italy and England, and spent a year with a master woodworker doing historical building restoration.

In 1988 James returned to the U.S.A. with a large collection of traditional German tools, antique ironwork, and historical reference material with which to pursue his craft. He currently lives and works in Oakland, and devotes time to both artistic blacksmithing and historical education. Check out Instagram to see more of what James is up to. 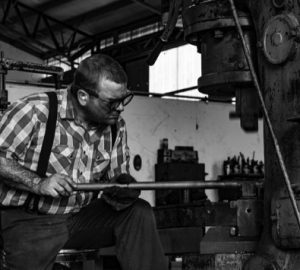 Andy Dohner works out his iron studio in southern Oregon, focusing on functional and sculptural objects. His background in steel manufacturing helps to inform his high level of craftsmanship and attention to detail. Andy employs both modern and traditional design sensibilities to the work he does in both steel and bronze, all with a strong emphasis on forging process. In addition to his work as a studio artist, Andy has exhibited and taught widely across the country.

Lee Sauder began blacksmithing at the tender age of 12, and after a couple of years of college, cultivated his passion by working under well-established blacksmiths including OK Barnes in Maine, Chris Axelson in California, and Vaclav Jaros in (then) Czechoslovakia. Upon return to Virginia in 1982 he operated Wood Creek Forge (formerly run by his first master, Larry Mann). Since 2009 he has lived and worked on House Mountain, near Lexington, Virginia, operating Germinal Ironworks, forging sculpture, furniture, and architectural metalwork. Lee has been exploring bloomery smelting over the course of more than twenty years and hundreds of smelts, transforming bloomery iron into contemporary sculpture. 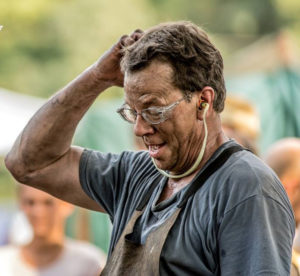 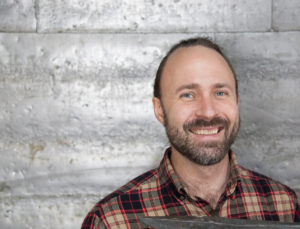 Nick Tomlin operates the Providence Hammer in Rhode Island, specializing in historical and restoration ironwork. Since 2016 he has been exploring iron smelting in both the US and Colombia. His interest in smelting includes the bloomery process, which will be the focus of this workshop, but also extends broadly into other realms of fiery transformation. Nick has a deep interest in processes that involve the development of human skills over-reliance on technology. Bloomery smelting involves a powerful combination of common sense and intuition, an ancient and eternal chemical process that will speak directly to those who engage with it.